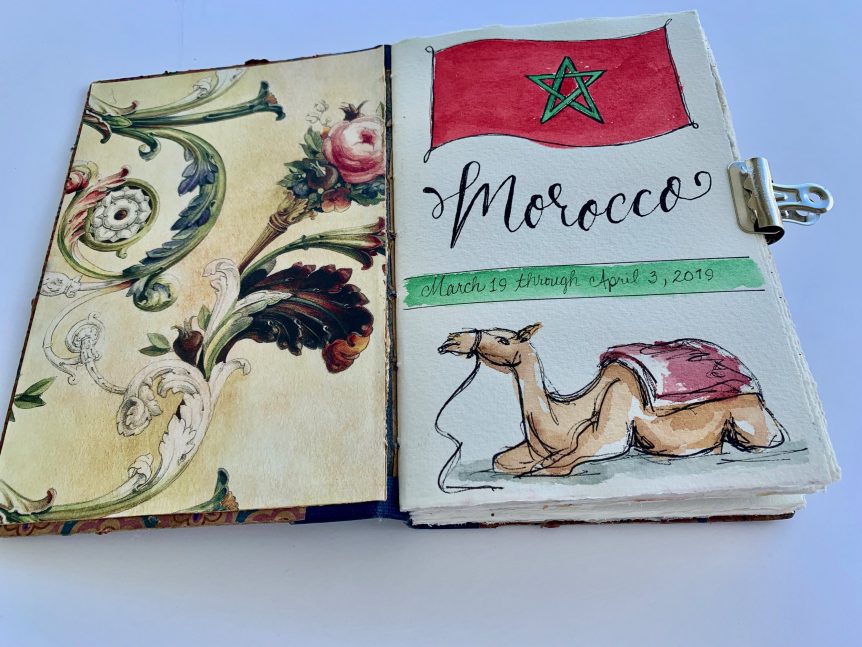 “Africa was the most exotic place I could conceive of—the end of the world—and I knew I would go there one day.”

Ever since I was a teenager in the late 70’s, the desire to visit Morocco has been strong. The exotic countercultural appeal to artists, writers, rock stars and adventurous travelers always stirred an urge to immerse myself in this place. I knew it was somewhere I would fit in, but wondered if it was too late for me, now in my late fifties, to experience Morocco as I always wanted to. Having lived the last 3 decades as a wife, mother and homemaker, I was no longer the carefree Bohemian young girl who envisioned herself traveling the hippie trail in search of spiritual enlightenment. Perhaps it was best that I was on the cusp of being not quite old enough to head off on my own during that era, but had I been past my teenage years, I have no doubt that I would have found my way there.

In my head, I romanticized about nomadic Kerouac and the rest of the beat generation, traveling, documenting, sketching and having intoxicating intellectual discussions in hidden corners of the souk. I longed for the richness and diametrically different culture and the freedom it represented.

Needless to say, this Wandering Artist’s heart leapt when I finally found just the right journey to Morocco. It started nearly a year before I actually went on the trip. Reading a blog post on social media, I saw a friend had shared an announcement about an art retreat with an artist I always admired and wanted to learn from, Orly Avineri. The combination of Northern Africa and this amazing Israeli artist was too tempting to pass up.

You would think it would have been easy to make the decision to go, but I agonized for several days. I drove everyone crazy with my “should I do this?” questions and my back and forth “I’m going” and “I’m not going.” That Bohemian girl who once would have stuffed a toothbrush and change of underwear in a backpack and taken off in a heartbeat had since experienced over thirty years of doing the responsible thing and bending to what others expected of her. Not to mention I had grown accustomed to 700-thread count sheets, hot bubble baths and a blow-dryer!

#1 My friend who originally shared the trip on social media, told me she was going. That ticked off the box that said, “Okay, I know at least one person on this trip.”

#2 My future daughter-in-law not only said GO, she also reminded me that my late husband would not have batted an eye, nor would I, had he still been alive.

#3 The woman hosting the retreat, Michelle Fletcher was perhaps the greatest draw. I didn’t know her yet, but I looked at her eyes in the photo on the blog post and I read her description of the trip. Her eyes said “I know you” and her words said, “come be with me.”

I hit the SIGN UP button. Non-refundable deposit paid. Done. I was going to Africa.

And 10 months later, the day arrived . . . I flew from Orlando to Boston then boarded my overnight flight to Paris. A four hour layover at Charles de Gaulle and then another 3.5 hour flight to Marrakech. Although I should have been tired, for some reason I was full of energy. Adrenaline was coursing through my body the entire trip as I anticipated the adventure ahead.

My heart was racing as I watched the terrain change on our flight from Europe to Africa – a new country and a new continent for me in my travels!

Marrakech was surprisingly flat and from the air I was mesmerised by the vastness of it all. There was literally nothing as far as the eye could see surrounding Marrakech. Finally, after 35 hours of travel, I arrived.

Past the intimidating security, long immigration lines, a confusing currency exchange, another bag check on the way OUT of Marrakech Menara Airport, and I was finally stepping foot on African soil. By then I had met up with 3 other women attending the retreat and we chatted on our brief ride into the Medina to our Riad.

The ride from the airport gave us a brief feel of the city – I was surprised at how much green there was . . . I can’t imagine the engineering feat it took to get irrigation to this desert. I would soon learn how scarce water really was here.

The pulse of Marrakech began to pump through me as I had my nose glued to the window of our van. Honking horns, foreign tongues, people, cars, bikes and tuk-tuks all racing in different directions!! There seemed to be no traffic patterns and several times we were so close enough to a scooter beside us, I could have shaken hands with the driver. Not for the faint of heart, this crazy circus made me laugh out loud. WELCOME TO MARRAKECH!

And the color! Marrakech, known as The Red City, {although I would argue that it was more pink than red} was at first glance, a plain, walled city. Most buildings were only 3 stories at most, with the exception of the minaret tower of the Koutoubia Mosque which overlooked the city from the South West corner. It wasn’t until I was up close, within the walls, that I was blown away by the architecture, art, tile, doorways and sculpted wood. Fascinating and beautiful, gorgeous and asymmetrical in every way, I was moved by how different it was from anything I had every seen.

Arriving at our Riad [Riad Houma], we stepped out of the van into a cacophony of young men grabbing bags and arguing with each other over who was doing what. I had no clue what these men were shouting in Arabic, however based on the body language and shrillness of the noise, there was definitely an argument over who was carrying what. Bags were thrown willy nilly into carts as we were gathered and rushed through an alleyway. I glanced quickly back at the men still arguing and wondered if I would ever see my suitcase again. We turned several corners and the anxiety was building while I made a mental list of my computer, jewelry and other valuables I had just been whisked away from. Suddenly, a large wooden door opened before us, and I felt like I had just walked into a secret, sacred place. Inside the Riad, the open-air courtyard was lavished with low couches and giant pillows while sheer, billowy curtains fluttered around us on tall columns leading up to the sky. I could hear faint music, water trickling and the scent of incense erased every bit of worry and anxiety I had experienced just moments ago. Ahhhhh, Marrakech, I love you.

Mint tea was poured, introductions were made and platters of dates, dried fruit and nuts were passed. A gentleman appeared and handed us each a beautiful key with embossed leather strap and he pointed us each in the direction of our rooms. Mine was on the second floor, overlooking the beautiful courtyard. My luggage was already waiting for me, neatly placed just outside the door, fully intact. Whatever confusion and insanity it took to get it there didn’t matter . . . once inside the Riad, everything else just faded away.

My bedroom at the Riad – shared with my sweet new friend, Stacey!

And then there was Michelle, our host [and my girl crush.] I was instantly mesmerized by her. From her hair tumbling down her face from the knot on top of her head, past the dozens of necklaces and bracelets that jingled as she moved, over her chic linen sheath falling off one shoulder and down to her slippers made from embossed leather and exaggeratedly curled at the toe. She was about the coolest chic I had ever seen. Wait a minute . . . SHE was ME! The “me” that I wanted to be 30 years ago when I dreamed of traversing through Morocco! I found her, my kindred soul sister and I could not wait to get to know her better and follow her like a puppy dog across the Sahara!

After an hour or so to freshen up, we were invited to the rooftop where a beautiful table was set under a full moon and stars where we could overlook all of Marrakesh. A fire burned, scenting the night with a smoky fragrance and the call to prayer filled the evening air. This was a beautiful moment, and again, I stopped to make myself be present – to feel it, breathe it, take it all in.

We spent the evening dining on couscous, nightshades and lamb while animatedly conversing and telling stories. What a spectacular group who I adored instantly! A lovely local woman decorated our hands and arms with henna as we drank good wine, laughed and told stories and I knew I was among a beautiful tribe of creatives. This was the Marrakesh I had dreamed of so many years ago.