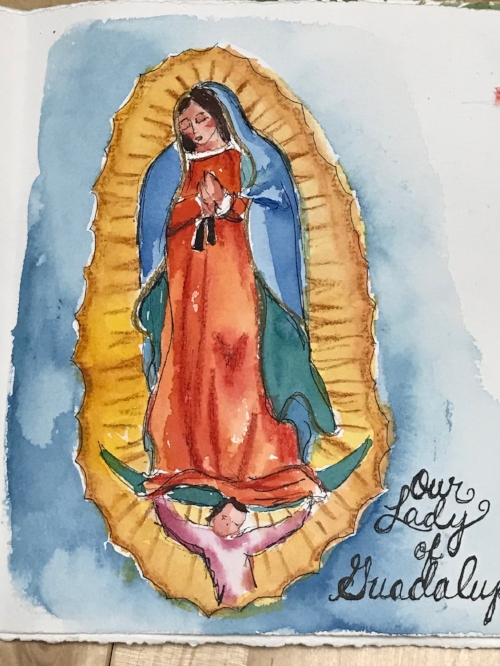 Upon arriving in Boca de Tomatlan, our vans pulled up to a folding table on a dusty, dirty road at the bottom of a hill.  There stood a woman with a safari-type hat, water shoes and a clipboard.  It was such a random and almost comical sight as young boys appeared seemingly out of nowhere and began unloading suitcases.  There was chaos and instructions being called out in broken spanish/english as the woman was trying hard to look at labels on bags and assign spaces. – I was trying to wrap my head around the whole scene.  She was clearly going to organize us but the pieces weren’t fitting together in my mind.  Why weren’t we pulling up to the Casa de los Artistas and could these young boys be our bellmen?

Some bags were being loaded into a fishing boat and some were being lugged by boys in all directions.  It was LOCO!  I tried so hard to keep my eye on my own suitcase but lost track of it quickly.  When the dust finally settled,  I was the lone person standing awaiting my room assignment.

It was at this point, I discovered that the woman was an “intern” and it was only her second week.  I signed up for the retreat a little late to get a room at the Casa, so I was supposed to be in a  “sister” house.  I really didn’t know what to expect or how far away I would be from the group.  She explained that my apartment was on the “other side of the river” from The Casa and she gave me a map and directions to where I was staying and gestured me on my way.  “Meet us at the Casa at 6pm for cocktails,” she called after me.  “You can either cross the river to get there, or walk the long way through the jungle – just follow the map!”

So off I went down the calle (road) in the direction she pointed, and urgently called my daughter..

“What have I done?” I cried to my daughter on the crackling phone connection as I stood alone on a dusty road in a tiny, remote fishing village in Mexico. Protectively clutching my purse and trying to roll my carry-on suitcase over the ruts and cobblestones with my cell phone wedged between my ear and shoulder, she said, “Mom, what did you expect? You’re in a third-world country!” Click. The phone went dead and I looked around as I silently FREAKED out.

With my previously cute but now sweat-soaked sundress and little wedged sandals that were caked in dirt and completely inappropriate for the environment, I realized I didn’t BLEND. My look screamed “Tourista!” I imagined the locals were looking at me, laughing and calling me Gringa under their breath. {This couldn’t be further from the truth, but at this point, hysteria was about to set in.}

I made it down the road and after a few minutes, I found my casita which happened to be right next to the Tortilla Factory.  I shoved open the heavy iron gate out front and found my door, just as the intern described.

A charming elderly gentleman appeared – his name was Jose and he proudly announced that he was the landlord.  After unlocking numerous locks on the barred doors,  Jose took me into the casita and showed me around.  Much to my relief and surprise, it was sparse but very clean.  It was actually pretty adorable.  A tiny front room with a mini kitchen led into a bedroom and private bath.  All the basics and no frills, but that was all I needed.

Once Jose left me, I took a breathe as reality set in and I collapsed on the sofa and sobbed.  Thoughts flooded my mind like how quickly could I make my way out to the main road and catch a cab to the airport and get the hell out of there and go home.  I was a bundle of nerves and the hardships of the past year just came crashing down.  The flood gates opened and there was no stopping the tears.  When and how did I become this scaredy-cat who just wanted to hide?  That was never me in my past life, yet here I was having my own private

After 5 minutes of feeling very sorry for myself, I got up and went to wash my face.  And that’s when I saw it . . . on the little fridge in the kitchen was a picture of Our Lady of Guadalupe.  I was overwhelmed with strength and peace – sort of a “snap out of it” moment – and I knew I was going to push through and stay the week.  I surrendered . . . knowing Our Lady would help me through!

This site uses Akismet to reduce spam. Learn how your comment data is processed.